Summary: Hefty and Scaredy accidentally break Papa Smurf’s telescope. In a panic, they hatch a plan to hide in plain sight. They put on some dresses that Smurfette has hanging on her clothesline and introduce themselves as new smurfs from the Girls’ Village.

Papa Smurf sees right through this plan and works with Smurfette to teach them a lesson.

Commentary: It’s “The Bosom Buddies” Meets “The Smurfs”! It’s the ultimate test of the viewer’s viewpoint on the world. I’m sure some will be outraged by this cartoon, some will see wild political statements in it, and others will appreciate some kind of deep message they see in it.

It’s really just a silly cartoon using some old-school gags. The first gag immediately is Smurfette teaching the pair “how to Smurf in heels!”, so there is some topical relevance to internet memes.

It’s a cute outing, and the obstacle course they have to run is well played. (Yes, it’s the same obstacle course from “Who’s Heftier?“) The storyboards vary the point of view and the angles often and in interesting ways. The drama is undercut by how silly the whole thing is and how obvious the ending will be, but it’s still a fun episode.

I’m also impressed at how manly the pair become when they put the dresses on. Smurfs are kind of doughy to begin with. But when Hefty and Scaredy don their new get-ups, they look and act like macho men in bad drag. I don’t think there’s ever been a separate Smurf and Smurfette walk cycle quite this exaggerated, but it helps to sell the gag.

Also, their wigs are well rendered. It looks exactly like there’s yarn coming out of their white hats. It has the right texture and shape, and even the bounce.

Smurfs are a wonderfully malleable concept. Theoretically, they’re all the same height and shape and size. It’s 100 duplicates of the same character. Yet, the character designs can add just a little or a lot to them to make them wildly different.

Whether it’s Hefty’s heart tattoo and slightly broader chest or Brainy’s glasses, it doesn’t take much to create a character.

Seeing Smurfs playing any kind of dress-up always works — they had an entire toy line in the 80s, remember, that consisted of them being dressed up for different occasions, whether it’s a sport or a career choice or a hundred other things.

This episode plays with that to an extreme.

And, look! Another Smurf enjoying a fine waffle while watching an obstacle course race!

Title Translation: The French title works out to, literally, “In the Skin of a Smurf.” This is a good time to mention that literal translations are rarely fair. They don’t take into account common expressions or phrases that don’t make literal sense when you translate them from one language to another. I have fun with it once in a while here, but I also acknowledge it.

I think “Smurfs in DIsguise” likely plays better in North America, even if it seems to promise that a Transformer will be guest-starring in the episode.

Summary: Jokey Smurf riles enough Smurfs up over his exploding gag presents that they combine forces to teach him a lesson. They create the ultimate exploding gift box out of random things they find in Papa Smurf’s lab.

It backfires. The explosion creates a number of mini-Jokey Smurfs, who go on to terrorize the Smurf Village with reckless abandon. They’re downright dangerous, eventually rebelling against all authority and even planning on blasting Papa Smurf to the moon.

It’s up to Vanity and Jokey to fix the situation. Oh, and here comes Gargamel!

Commentary: I have to think the storyboard folks had a lot of fun with this one. I don’t know if this series is storyboard-driven, but I would believe it if you told me it was.

When all of the Mini-Jokeys are wreaking havoc, there’s a great series of short scenes showing each one doing a classic gag — from writing on Smurfs’ faces to adding pepper to their cupcakes to gift boxes packed with a boxing glove to punch them. It feels like every animator and every storyboard artist had their chance to add their favorite gag. The director was smart enough to cap it before it went too long.

We also get an opening sequence where Jokey is handing out presents all from his own point of view. It’s two arms reaching out holding a present as he runs from Smurf to Smurf. I’ve seen it used here and there across this series so far, but this is the most effective use of it. It fits the moment.

Sure, it feels a bit inspired by the classic “Doom” video game, but it still works. Heck, that probably makes it even cooler to a younger audience. Always throw in video game references to curry the favor of kids these days…

I’ve said before that Grouchy is a bit of a one-note joke and shouldn’t be over-used too much. That goes double, if not triple, with Jokey. His only gag is that he has gift boxes that everyone knows are going to blow up in their faces, but he manages to find a way to trick them into it anyway. This just makes every Smurf look stupid.

Also, I’m not a fan of practical jokes, much for the same reason as I just stated: They create jokes at other Smurfs’ expense. I don’t find it funny to fool people into doing something that might embarrass or hurt them.

So, yes, Jokey is best in extremely small doses or in a creative larger one. The creation of little Jokeys that wind up using more than just the old exploding yellow box trick does justify this episode. They turn it into a horror episode, really. Imagine 20 versions of you at two-thirds the size taking over your town and threatening the very life of your father or the mayor. That’s what the mini-Jokeys do here. It’s a scary situation for the Smurfs.

Part of me couldn’t stop thinking about Captain America when the rocket set to blast Papa Smurf off into space is fired off with two Smurfs climbing on to save him. They should have all wound up in icy waters, only to be defrosted decades later. (Sorry, I’m a North American comics reader who grew up on Marvel. I’m a cliche, but it’s how I think.)

We have another example of a Smurf eating a waffle! This time it’s Jokey. I have more examples in my reviews of “Waffle Wednesday” and “Monkey See, Monkey Do.”

Title Translation: “Ta farce de trop” is “Too Much Joking.” It works. In fact, given my stance on practical jokers, I think I agree with the French title more. Dimwitty finds an egg and is thrilled to become its surrogate father. Then, the Smurfs are due for a fashion makeover, but the design competition is fierce. 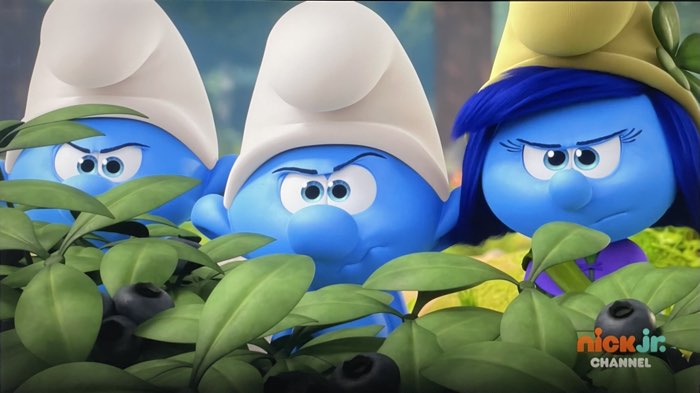