This is The Little Barbarian, the video game double of video game-obsessed comic character, Kid Paddle: This is the Princess: Across 15 volumes of “Game Over,” The Little Barbarian attempts to save the princess’ life in the most video game ways possible.

Usually, he’s walking across the first panel when he’s confronted by an item he can pick up to use.  It might be a magic ray gun that turns whoever he shoots into birds, or bar codes, or puzzle pieces.  It might be a magic potion that allows him to assume the form of anything he touches, or turns him into a dog, or gives him freakishly large, strong, hot hands.  It could be a magic button that controls the weather.

With that new skill, he sets out to rescue the princess.

He fails miserably, but hilariously, every time.  He’s incredibly unlucky and occasionally downright dumb.  Each story is only a page or two, at the most.  In each book, you’ll get 40 different scenarios with different punchlines, each crazier than the last.

“Game Over” is the Wile E. Coyote of the comics and video game world.  The book is just a series of blackout gags, most of which end in Kid Paddle’s and/or the princess’ deaths.  The final panel spells out “Game Over” in a matching way, and it’s occasionally the most clever thing on the page.

If you liked Lewis Trondheim’s “Mister I” and “Mister O” books, you’ll recognize the format here, though this creative team doesn’t stick to the rigid tiny grid system.

It’s all done in a very cartoony style, which matches the simpler. more cartoony look of classic games like “Super Mario Bros” which it so clearly evokes.   It also helps to blunt the violence of the book. This is pure cartoon violence, with people dying from the most ridiculous reasons possible, and it’s often on panel.  Everyone at several points in the book gets killed in a gruesome, blood-soaked way.  It’s a bit more palatable to see it this cartoony.  It still looks like the character has been put through the meat grinder, though.

You Don’t Need a Translated Edition!

It’s simple pantomime storytelling.  Every story is silent. The Little Barbarian never utters a word past a grunt.

You don’t need to know French to read and like this book.

….But You Do Need a Better License

I don’t know what the deal is, but you can’t buy this book outside of Europe. It’s not available in North America through Izneo. (And it’s certainly not on Comixology.)

This doesn’t bother me so much with books that aren’t translated, but with something like this, it’s downright infuriating.  It’s the classic case someone leaving a bag of money on the side of the road that they just don’t want to pick up.

Complain to Glenat, I guess.

Credit Where Credit Is Due

The book is created by Midam, Adam, and Benz. I have no idea who does what, which is why I haven’t used their names before this.  Also, they’re new to me, so I have no previous reviews of books any of them have been involved with that I can link you to.

They still deserve to be named, though.  They do great work on this book, and it’s too bad more people can’t read it. 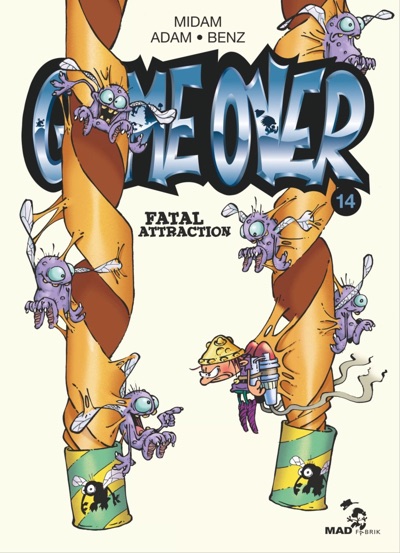 Yes, though I apologize for how annoying this recommendation might be. But as a fan of the classic Looney Tunes shorts and this style of silent and visual gag-based humor, this is an excellent book.  There are 15 volumes in this series. That is an enormous amount of material begging for readers, but unavailable due to silly geofencing of rights, I guess.

Buy It Here (If You’re In Europe)

If you want to read some of the gags, you can always go through all the volumes on Izneo.com and read the previews for each.  That’ll give you a couple gags per book.